Faithful readers, please forgive me for the lack of posts this week – I was down for the count with food poisoning. I’m now back among the living. 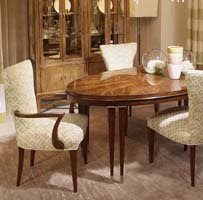 The Wall Street Journal last Friday finally announced what we all hoped would happen: furniture is getting smaller. Feel that? That’s the weight of a zillion McMansion-scaled sectional sofas rising off your shoulders. 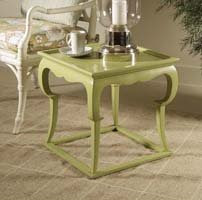 The Journal mentions Century’s Metro Luxe collection as an example of manufacturers responding to the changing market. The dining table and green cocktail table below it are from that line; in DC, Century Furniture is available at the Design Center.

The Journal also mentions Rowe Fine Furniture’s Mini-Mod line. Their Monaco Sofa (below) looks quite nice, and it has three seat and back cushions – many smaller sofas have only two. (The truth is that rarely do more than two people sit on a sofa. But it’s nice to have the option of squeezing in one more friend for a drink before dinner – 3 cushions encourages that in a way that 2 cushions does not…)

The Journal connects the smaller-furniture trend to the housing slowdown, citing “Homeowners whose plans to trade up are on hold because of the chill in mortgage lending and the housing market.”

True enough. But isn’t it also possible that the expanded interest in all things house-related over the past 5 years has created more savvy consumers? Surely people don’t watch all that HGTV without learning something.

When I started my business in 2003, I encountered out-of-scale furniture often. In city homes from the teens and 20s and in beautiful old suburbs like Chevy Chase, scale wasn’t an issue. But in row houses and colonials from the 30s and 40s, certain 18th and 19-century Georgetown houses, urban apartments of almost any era…the furniture was just too darn big. And you know what? My clients knew it. They knew, on a visceral level at least, that something was horribly wrong. 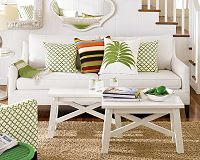 But what were our options? Where were we to go? Antique stores, sure, but for people who liked the convenience, price point, and general design direction of big-box stores like Pottery Barn and Crate & Barrel, there really were few options.

The rather handsome Arlington sofa (white, above) is from Pottery Barn’s “small spaces” collection, launched two years ago. The photo of designer Angelo Surmelis, host of 24 Hour Design, was taken from HGTV’s website.

Where classic and modern hang out and drink gin.